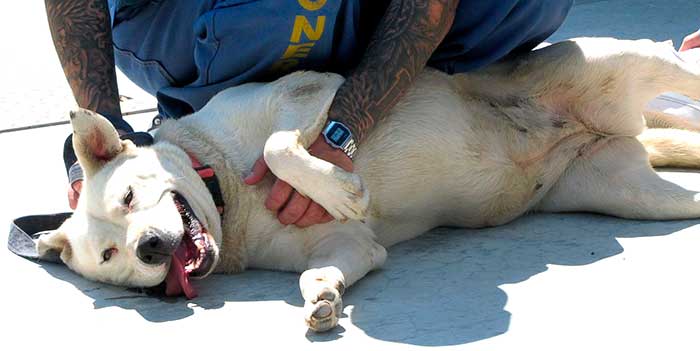 [tps_header]Dozens of deaf dogs in California were recently forced to evacuate a shelter that was threatened by a wildfire. Now a group of inmates at a nearby state prison are caring for them.

Nearly 50 dogs at the Deaf Dogs Rescue of America in Acton, California, were evacuated this past Sunday evening after the shelter’s directors – Lisa Tipton and her husband Mark Tipton – noticed flames from the Sand Fire blowing in their direction.

“We’re pretty high up on a hill and we didn’t want to take a chance on floating embers ’cause all it takes is one to light this whole place up,” Lisa Tipton told ABC News today. She said she called dozens of local centers, shelters and other rescues, but only the California State Prison in Los Angeles County offered to take all the dogs, no questions asked.

Located in Lancaster, California, the state prison has group of inmates who are actively involved in Paws 4 Life, a program that matches dogs with inmates. The dogs come from county shelters and, according to Kristina Khokobashvili, a public information officer for the California Department of Corrections and Rehabilitation, are at high risk for euthanization.

And so when Lisa Tipton brought nearly 50 of her rescue dogs to the jail Sunday night, she said she knew “they were in good hands.”

How Does A Pug Born Without Eyes Defy The Odds & Do Such An Important Job?

Chained, This Dog Lay On Concrete Muzzled With Duct Tape All Day Every Day Until Neighbors Jumped The Fence (Video)